Different marketing sources have the potential to reach different audiences. However, not all audiences are your ideal customer.

To maximize profitability, you need to invest marketing dollars in the sources that drive quality traffic and avoid sources that increase the likelihood of chargebacks.

But how can you tell if a marketing source is good or bad?

Midigator® analytics can provide the insight you need to evaluate the profitability of a given marketing source.

This is the story of how a merchant used Midigator’s detailed analytics to identify marketing sources with a high risk for chargebacks.

Sales at Betty’s Beauty Bar* had never been better. The company’s skin care products were flying off the shelves.

Betty attributed her success to two things. First, she had great products that everyone loved. Second, she had a top-notch marketing team that did an amazing job of getting her products in front of high-converting audiences.

Things were going great until, all of a sudden, they weren’t. Betty’s chargeback count went through the roof, seemingly overnight.

Betty’s initial reaction was to shut off all her marketing campaigns until she could figure out what was going on. She wanted to stop traffic entirely so the problem wouldn’t get worse. But intentionally killing sales and then regaining momentum after the problem was fixed would be a nightmare.

Looking for a better solution, Betty turned to Midigator for help. The data in her variable analytics widget held the answer.

In-house employees at Betty’s Beauty Bar managed all the marketing campaigns. One employee in particular, Ben, had always done an outstanding job of creating high-converting ads. His latest ad was no exception — new customers were pouring in.

But, after looking at chargeback data by marketing source, Betty realized Ben’s high-converting campaign was not only generating a ton of sales, it was also causing a ton of chargebacks!

Betty took a closer look at Ben’s ad. What had he done differently this time around?

Ben tried to replicate the success he’d previously had with Facebook on Twitter. However, there was one major difference between the campaigns. On Facebook, Ben had targeted users 35-years old and older because that was the demographic most interested in the age-defying skin cream Betty was offering. On Twitter, age targeting wan’t yet available — therefore the ad was visible to the entire Twitter audience.

The customers coming from Twitter were all in the 18-25 age range. This younger demographic was vastly different from the customers Betty’s Beauty Bar usually sold to.

They were less financially stable than older shoppers, so suffered from buyer’s remorse after their impulse buy. And, the younger shoppers were part of a cultural shift that had been trained to believe going straight to the bank for a chargeback was a no-hassle alternative to dealing with merchants directly. So, they had no regrets about their cyber shoplifting.

Betty realized the solution to her problem was actually quite easy. All she had to do was turn off the Twitter campaign and focus on marketing sources that offer age targeting. Then, she wouldn’t be marketing to high-risk customers with a propensity for friendly fraud.

Betty’s actions had an immediate impact on her bottom line.

First, Betty’s chargeback ratio gradually returned to normal as the dispute time limit expired for the initial wave of high-risk Twitter customers. And, once the Twitter campaign was terminated, the chargeback count stayed low.

Second, Betty refocused on profits instead of just revenue. On the surface, Ben’s Twitter campaign looked like it was the ideal marketing effort because it had such a high conversion rate. But in reality, Betty’s Beauty Bar was actually losing money because the increase in revenue came with an increase in chargebacks.

Perhaps the most beneficial outcome of the experience, though, was the education that came with it.

If Betty hadn’t traced the spike in chargebacks to its marketing source, she likely would have poured more marketing dollars into the campaign because it was converting so well. Betty learned she needs to monitor risk KPIs just as closely as other campaign KPIs — like conversion rates and cost per acquisition.

Also, the experience taught Betty that fraud isn’t the only thing that can cause a marketing source to be unprofitable. Sometimes, chargebacks are the result of a simple mistake or an easily fixable problem.

Midigator analytics by marketing source made it incredibly easy to figure out where the problem traffic was coming from. Betty got her chargeback situation under control quickly before any long-term damage was done.

At Midigator, we believe the challenge of running a business should be delivering great products or services, not managing payment risk.

Midigator’s detailed analytics have helped Betty’s Beauty Bar and countless other businesses effortlessly reduce their risk of chargebacks. If you would like to prevent chargebacks and stop the unnecessary revenue loss, Midigator can help you too. Sign up for a demo today. 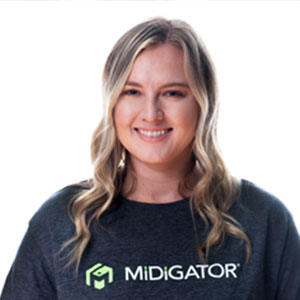 30 Telltale Signs of Fraud: How to Recognize High-Risk Orders

What are the most common signs of fraud? How can you tell the difference between good and bad orders? Here are 30 red flags to look for.
Read More

How to Fight Chargebacks

To boost your bottom line, you need to fight invalid chargebacks and recover lost revenue. The process is important and profitable, but it can be challenging. If you want to make chargeback reversals easy, check these step-by-step instructions.
Read More

3D Secure has been updated in recent years, and the platform’s functionality has changed significantly. Learn more about 3D Secure 2.0, and find out if this tool could help your business.
Read More
View all articles